Cameron Diaz: “I thought I was incapable of meditating”

When people think about meditation today, they think about controlling the mind, usually through some force of concentration. This feels unnatural for the mind and is usually not enjoyable to do. It requires a lot of disciplined practise, and has actually been proven to be largely ineffective.

The Transcendental Meditation technique uses the nature of the mind, rather than going against it. It is the rediscovery of an ancient technique that uses an instinctive desire from the mind to naturally go to a deep state of complete inner silence. For the mind this state is like coming home, and it instinctively knows how to go there, if we only allow it. When the right technique is used, anyone can meditate, it is easy and enjoyable to do, and is extremely effective.

Over 6 million TM practicioners and 600 TM researches performed over the past 40 years have confirmed that only when the mind “transcends” the finest stages of thought and experiences that true inner silence, the true benefits of meditation will become apparent.

1. Deep rest, deeper than sleep, while staying completely alert
2. Inner happiness, measurable through growth of happiness hormones
3. Activating our inner healing power we are far stronger to heal ourselves than we think

When the mind transcends the finest impulse of thought, it comes into a state of complete inner silence. This happens in a completely natural and effortless way. We can’t try to make the mind silent, nor do we have to. With the right technique, the mind will go there by itself. When the mind transcends, the body spontaneously comes into a very deep state of relaxation as well, far deeper than that attained even in deep sleep. 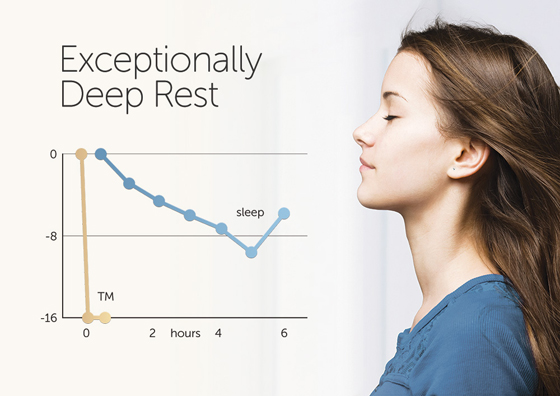 This can be objectively measured by monitoring oxygen consumption. This graph, from a Harvard Medical School research study, shows that, during TM, the body comes into a state of rest that is twice as deep as even the deepest rest during sleep. More than 30 studies around the world have confirmed this deep rest during TM practice.

This deep rest activates the inner healing power in our own bodies. Relaxation means relaxing tensions. The body has a completely natural way to remove tensions that it accumulates. This is what happens during sleep but the rest during sleep doesn’t always go deep enough to remove more deeply-rooted, traumatic stresses. Transcending gives a level of rest that can help dissolve those deeper rooted stresses.

Scientific research on war veterans has shown that the Transcendental Meditation technique lead to significant reductions in PTSD (post traumatic stress), anxiety, depression & insomnia, etc. And, after only 3 months of practice, 70% of the war veterans required no further treatment. The control group that received standard psychotherapy showed no improvement.

The video below shows several more examples of just how powerful TM can be for those who are suffering from traumatic stress. It also shows why more and more scientists, educators, celebrities and governmental institutions are supporting the TM technique.

Stress disturbs the normal functioning of the brain, causing, amongst other things, a decrease in the production of the “happiness hormone,” serotonin. A lack of serotonin influences not only our inner sense of happiness but is also associated with migraines, sleep disorders, anxiety, anger outbursts, Alzheimer’s, eating disorders, addictions and many others. One can try to influence serotonin artificially (as anti-depressants seem to do) but this only treats the symptoms, not the real problem. 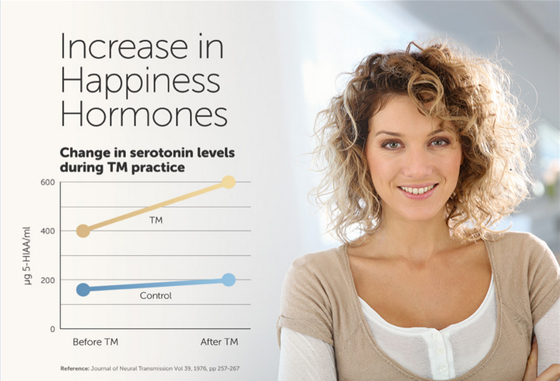 The experience of transcending, on the other hand, activates the body’s own healing ability so that the brain can function normally. The result? A completely natural increase in serotonin production during the TM practice and, eventually, during the rest of the day. This has implications in all areas of life as can be seen on this site.

When stress can accumulate throughout life, it will eventually disturb the natural functioning of our nervous system, resulting in all kinds of psychological or physical health problems. It is estimated that 80 to 90% of all diseases are directly or indirectly related to stress.

Transcending allows the body to remove even our deepest stresses, and thereby remove the cause of most health problems. We are far more powerful to heal ourselves than we believe.

Hundreds of studies, including more than $25 Milion on TM research in cooperation with the US National Institutes of Health, the biggest health research institute in the world, have confirmed the effects of transcending on our health. Below are findings from both the Cleveland Clinic and The American Heart Association.

The American Heart Association scientific statement concluded that the TM technique is the only meditation practice that has been shown to lower blood pressure and recommends that TM may be considered in clinical practice for the prevention and treatment of hypertension.  The statement also reported the finding that lower blood pressure through Transcendental Meditation practice is associated with substantially reduced rates of death, heart attack and stroke. Hypertension, 61:00, June 2013

5) How can I learn to transcend?

Transcending is effortless and pleasant to do, it can be learnt by anyone, and gives immediate results.

The experience of transcending can be achieved only in a completely natural and effortless way. It is an experience of complete, inner silence that cannot be achieved by trying to be quiet. The more we try, the more we keep the mind active. Trying to relax is a contradiction in terms. That is why most “meditation” methods that require concentration have limited effect.

The Transcendental Meditation technique is taught individually, by a professionally trained teacher who is able to lead a person, in a completely natural way, to the experience of transcending.

If one has had this experience once, then the mind remembers it and, afterwards, it can go back there spontaneously, in a totally natural and effortless way, provided that one uses the correct technique. This technique is taught step by step, during four consecutive meetings. This initial training course is followed by a extensive program of follow-up meetings to ensure continued correct practice.

6) Do you have 1 hour to discover how everything can change?

The first step to learning Transcendental Meditation is to simply attend a free 1 hour introductory talk at one of our centres which are located in every major city of Australia. Please fill out the form below and we’ll get back to you with our schedule of upcoming talks.